The foundation stone of the new building of Advaita Ashrama at 36 Ananda Palit Road, Kolkata, was laid on 30 March 2022 at 10:00 am. The stone, sanctified by Most Revered President Maharaj, Srimat Swami Smarananandaji, was laid by Revered Swami Bodhasarananda, Assistant General Secretary, Ramakrishna Math and Ramakrishna Mission, and all the other monks. Swami Muktidananda, Adhyaksha, Sri Ramakrishna Ashrama, Mysuru, Swami Nityamuktananda, Adhyaksha, Ramakrishna Math, Baghbazar, and Swami Vishokananda, Secretary, Viveka Tirtha were also present for the occasion.

The stone was laid in the midst of chanting of the Vedic mantras. Following this, there was one-hour session in which short speeches were delivered. Swami Shuddhidananda, Adhyaksha, Advaita Ashrama, briefly presented the journey of Advaita Ashrama from Mayavati to Kolkata. Swami Bodhasarananda, Swami Muktidananda, and Swami Vishokananda, also spoke focussing upon the history, importance, and contributions of Advaita Ashrama.

This was followed by lunch for all the invitees.

This new building is going to be a ground-plus-six-storied structure to be erected at an estimated cost of Rupees 42 crores. The work is expected to be over in 3 years’ time. 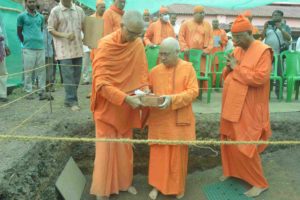 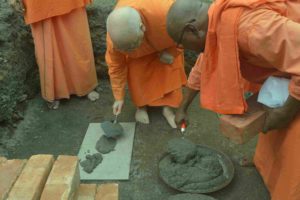 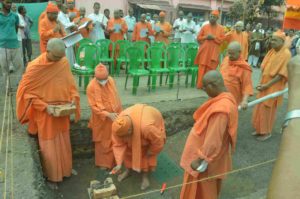 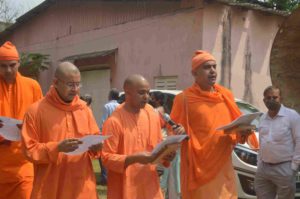